Even before the fires were out in Sonoma County, the scramble for real estate was on.

“The fires started Monday and on Wednesday I was showing properties” to people who had lost homes, said Tammra Borrall, a Realtor with Pacific Union International in Santa Rosa. “It was shocking — we were just in survival mode, and yet we had people who wanted to be out looking at homes. They had the foresight to see what was happening. It was like musical chairs for homes. They didn’t want to be left without a roof over their heads.”

The destruction of approximately 5,000 homes in Sonoma County has sparked a frenzy that may sound familiar to people in San Francisco and neighboring areas: homes attracting multiple offers and selling within days at prices well above asking, often for all cash.

“I come from the Peninsula and have friends in Menlo Park, Palo Alto. You have been dealing with that intense pressure for some time. Here it has been more balanced,” Borrall said. Before the fires, “half our sales had multiple offers. Now, all our listings have multiple offers.”

The median price of an existing, single-family home in Sonoma County jumped 4.7 percent between September and October and another 1.8 percent in November, hitting a record $660,000 last month. Compared with November 2016, the median price was up 14.7 percent, according to Multiple Listing Service data compiled by Rick Laws, senior vice president with Pacific Union in Santa Rosa.

Homes are also selling faster: The average number of days between the time a home was listed and an offer was accepted dropped to 45 in November from 69 in October. In November 2016, it was 67. These figures exclude condos and new homes, but new homes are also being snapped up. 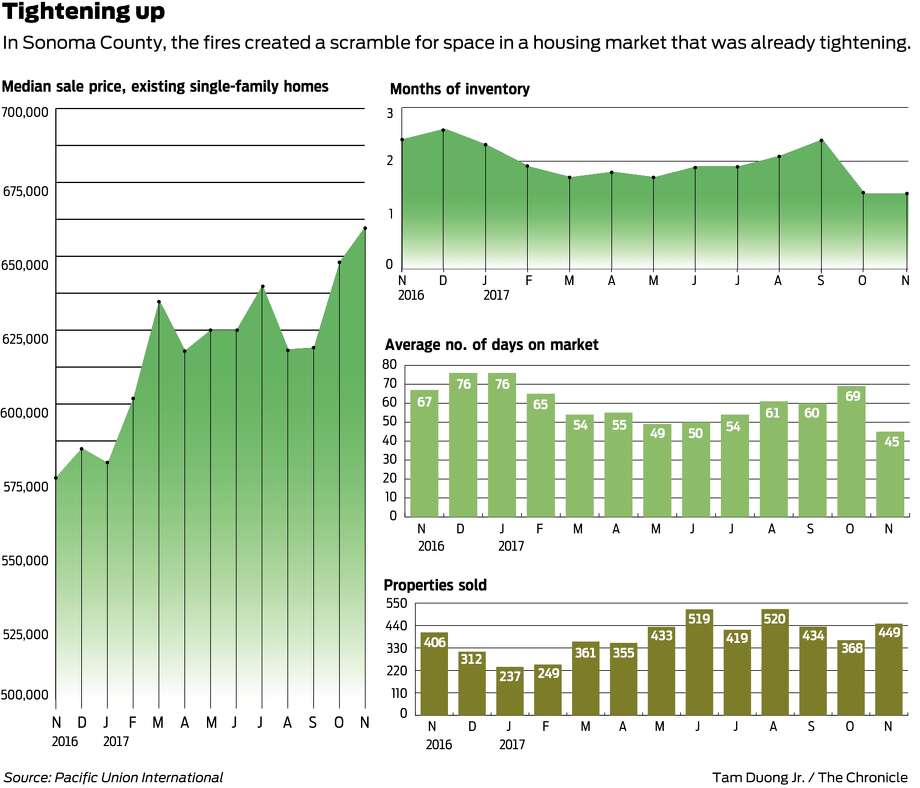 At Skyhawk Reserves, a new development not far from the destroyed neighborhood of Fountaingrove, “we were averaging about three sales per month” before the fires, said Mark Cooper, sales manager for developer APM Homes. “Within two weeks of the fire, we sold out the remaining part of our subdivision, which was 20 homes.” Skyhawk homes, priced at roughly $1.2 million to $1.4 million, are similar to those in Fountaingrove; all 20 were purchased by former residents of the upscale community.

Aruna and Vivek Jayaraman signed a contract on a home in Healdsburg on Oct. 16, one week after their home in Fountaingrove burned down. The couple had been looking at that house before the fire and had considered offering less than the asking price, because it had been on the market a while. After the fire, the couple immediately offered asking price.

“It was stressful the first week, figuring out where we were going to live. You’d hear about a rental that was available and all of a sudden it wasn’t available anymore. Our insurance company couldn’t find anything. They offered to house us in Menlo Park,” Aruna Jayaraman said. That would have been impossible, because she is a doctor at Sutter Santa Rosa Regional Hospital and can’t be more than 30 minutes away when she’s on call.

The owner of the Healdsburg house “had an offer from an insurance company to rent it for a ton of money,” but he accepted the couple’s offer instead, Aruna Jayaraman said. If they were buying it now, they’d have to offer more than asking price, she said.

Sonya and Michael Sweeney are waiting to close on a home they purchased west of Sebastopol. They paid roughly the same price — around $1.26 million — they had paid for a home in Fountaingrove less than a year ago. But the new house has only 2,600 square feet while the old one had 4,000 square feet and a pool. The couple decided not to rebuild their previous home because by the time it would be done, their two kids would be in college and they would not want a big house.

After the fire, the family “wanted to take a break” from the devastation left behind in Santa Rosa. The first house they looked at, in Penngrove, “had just come on the market and had four offers already,” Sonya Sweeney said. “They said be prepared to go over asking if you want this house. I had to pull over to the side of the road and write a letter about why they should choose us.” By the end of the day, the house had seven offers and went to a buyer “who was all cash and way over asking.”

She looked at other homes online and visited three in Petaluma, but everything seemed to have pink toilets, mold or other major flaws. “Everyone who had a problem house, it was like this is the time to unload that house,” she said.

There could be some truth to that. In Sonoma County, 357 single-family homes hit the market in November, compared with 288 new listings in November 2016, according to MLS data.

Realtor Sudha Schlesinger, who lost her home in northeast Santa Rosa, bid on a replacement home two days later a couple of blocks from her son’s high school because she wanted some stability for the 17-year-old. There were only three other offers on that home, and hers was accepted. “It was less competitive then” than it is now, she said.

Since then, she has helped four clients purchase homes, three for all cash. One of her older clients had to pull out of a deal because the insurance company could not say when the claim would be paid and she could not get a loan. “You don’t necessarily have to pay cash,” Schlesinger said, but “people who don’t have the ability to get a loan are more handicapped.”

Some fire victims were able to buy a new home quickly because their parents paid for it, Borrall said.

Others are using insurance money. Most policies provide separate coverage limits for a home’s structure, contents and additional living expenses such as rent and rental furniture. Because the fires were declared a state emergency, fire victims have up to two years to exhaust their additional living expenses. Normally these expenses are paid as incurred, but some fire victims have negotiated with their insurance companies to get them in a lump sum and used that as a down payment on another home that they may need to describe as a “rental” property, Laws said.

Jim Scally, who lost his home in the Windrose subdivision next to hard-hit Coffey Park, doesn’t know anyone in that area who has purchased a new home. “Everybody is renting. The big elephant in the room is, we don’t know what our insurance is going to pay us. That all takes time.”