By Nancy A. Ruhling

Although prices for condos in San Francisco remained flat during the fourth quarter of 2019 and sales volume declined significantly, according to a report by Compass, a number of new luxury developments with uber experiential amenities are tapping into a market primed with eager buyers.

“It’s true that the velocity of sales has slowed because the ultra-luxury sector is hitting new levels of prices,” said Sandra Eaton, regional director-West Coast Compass, who added that the average sales price of the city’s core condo market increased by only 1.2%, to $1.39 million, from the fourth quarter of 2018 to the same period in 2019, and that there were only 1,964 sales in 2019, the lowest volume in five years. “It takes time for the market to adjust,” Ms. Eaton said.

She said that “spectacular product” that meets or exceeds buyers’ expectations in terms of unparalleled, detailed finishes and 24/7 hands-on service is attracting home collectors who are “willing to pay the price.” 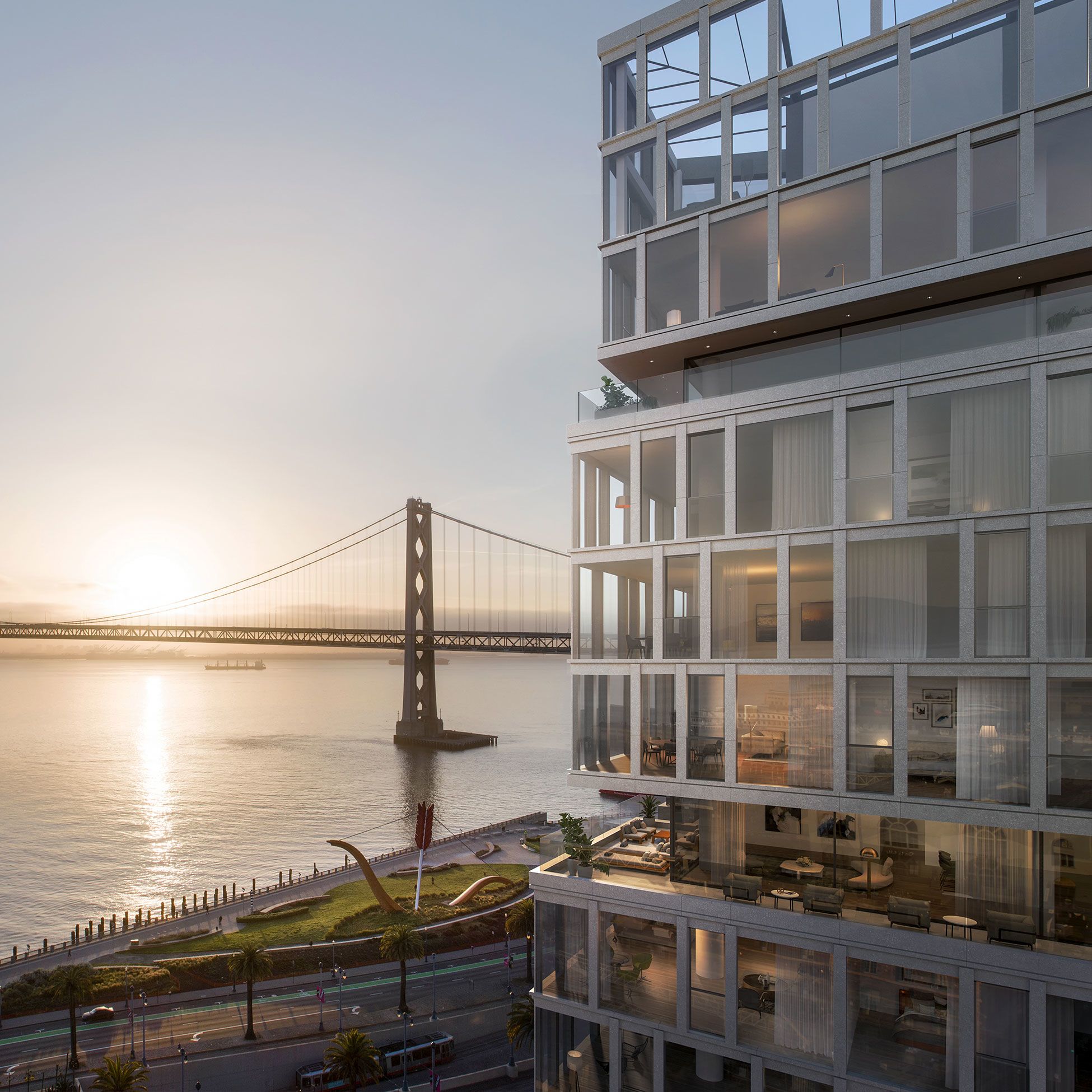 These new developments, Ms. Eaton said, offer the kind of curated concierge services that cannot be attained from an app.

“The new luxury is in creating an experience that’s a signature to the community,” she said. “It could be a series of chef dinners for a resident that takes place in the unit’s kitchen, an excursion to wine country or even on-site presentations by charitable organizations chosen by residents. It has to be something that creates an exclusive sense of community for the resident and others of similar interests.”

Here are some of the new condo developments launching sales in spring and summer that are attracting attention.

The building, whose neighbors are the historic Brocklebank Apartments and the Mark Hopkins Hotel that were designed in the mid-1920s, features a detailed travertine scalloped articulation inspired by Nob Hill’s Art Deco legacy.

Set atop a hill, the Crescent, which is Mr. Stern’s first multi-family project in the city, offers stunning views of the downtown San Francisco skyline, and its north- and south-facing crescent-shaped silhouettes were designed to optimize them.

The dramatic main entry, which was inspired by a garden crescent, is framed by ornamental planters and gated entries. Cobblestone pathways lead to double doors with bronze details and a signature oval marquee.

“This site gave us the opportunity to connect to the wonderful Art Deco-inflected classicism that abounds in the neighborhood, working with traditional ideas and interpreting them in fresh new ways,” Mr. Stern said in a statement.

Mr. Stern has designed a number of luxury residential condo developments, including 15 Central Park West in New York, The Century in Los Angeles and One Bennett Park in Chicago. 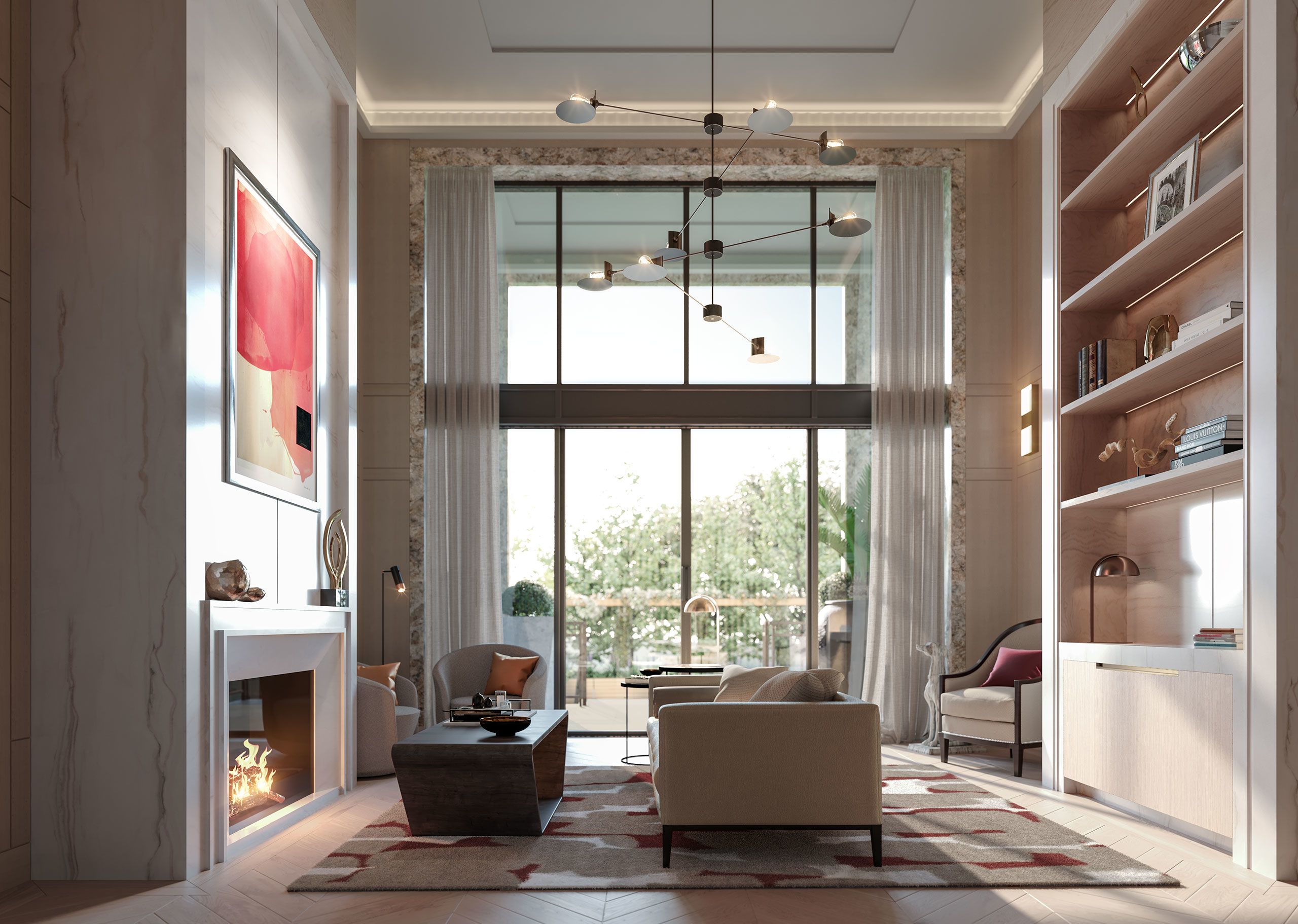 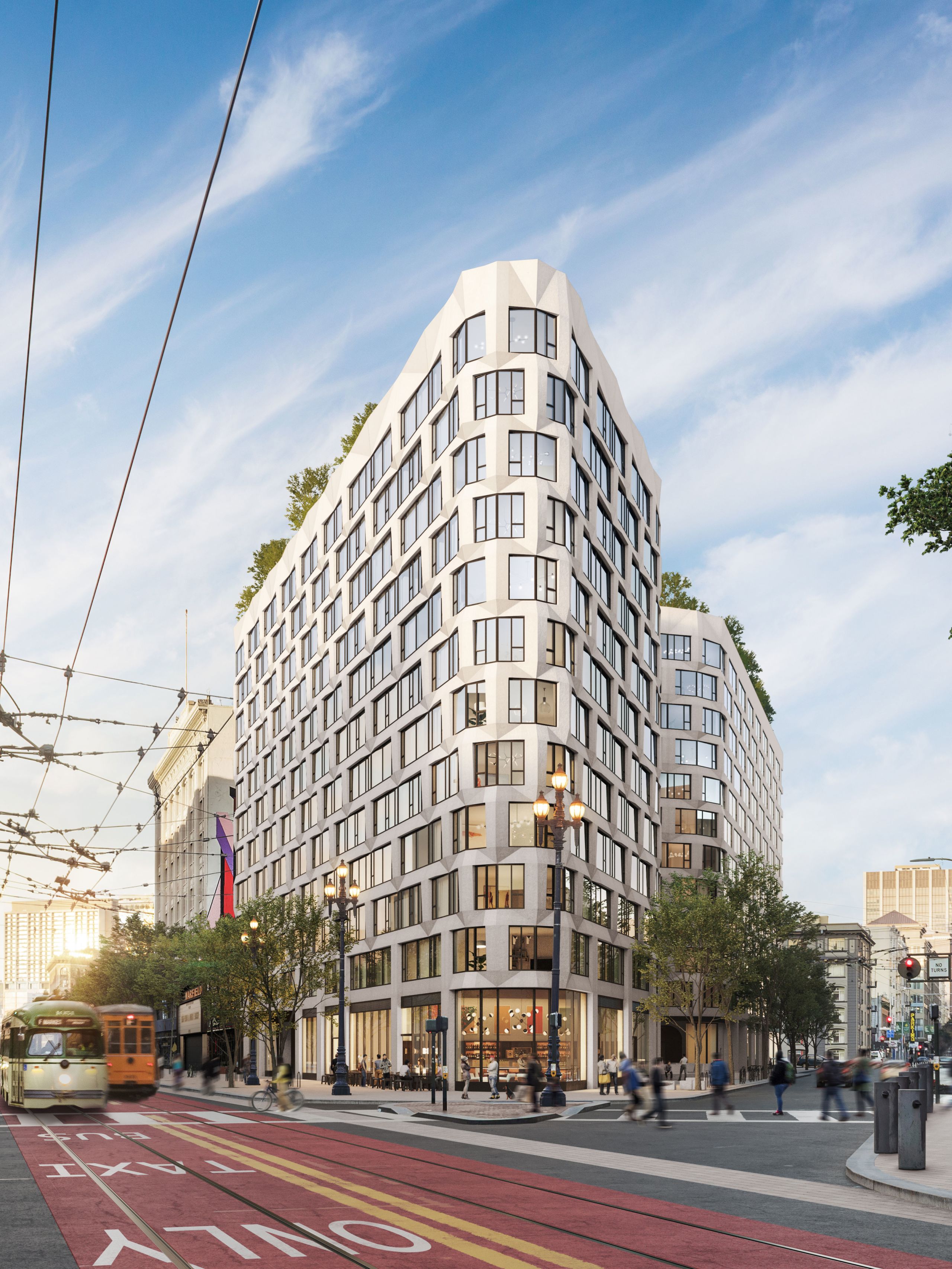 Mid-Market is a tech-savvy neighborhood that’s attractive to millennials: Twitter, Uber, Dolby and Square have headquarters there.

Sales will launch in late spring or early summer.

In the heart of the city’s rapidly transforming Mid-Market neighborhood, the 12-story micro-unit Serif is like a mini-city: It shares space with the tony LINE hotel, retail shops and restaurants and the legendary Magic Theatre, which since 1967 has been the vanguard of bold, avant-garde plays.

Serif, a white triangular structure clad in glass-fiber-reinforced concrete, dominates the corner where Union Square, Tenderloin and the South of Market districts meet and shares the block with the historic Warfield Theatre, an iconic music venue since 1922.

The 34,000-square-foot Serif takes its cues from the surrounding masonry buildings, imbuing the block with a hip, contemporary vibe.

It’s a big visual presence on Market Street, an emerging cultural mecca filled with a new generation of restaurants and bars that is being billed as the city’s latest hub of entertainment.

The Four Seasons Private Residences at 706 Mission, the 45-story, 510-foot, two-tower development, incorporates and preserves the historic 10-story Aronson Building, which dates to 1903.

Set in the city’s cultural center, the development, which overlooks Jessie Square, is steps from the San Francisco Museum of Modern Art, the Contemporary Jewish Museum, the Yerba Buena Center for the Arts and a host of other destinations. Its ground floor will be home to a new cultural museum.

Set on Yerba Buena’s last remaining buildable space, the Four Seasons Private Residences at 706 Mission has an undulating stone facade that pairs 1930s craftsmanship with modern design and takes its cues not only from the Aronson but also from the nearby Pacific Bell Building, which opened in 1925.

The sales center will open in July.

Number of Units: 146
Price Range: Prices start at $2.5 million. The premium penthouse residences are $15 million to $25 million, while the Grand Penthouse, which is expected to be the most expensive condominium listing in the city’s history, is $49 million.
Developer/Architect: 706 Mission Co. LLC/Handel Architects
Apartment Sizes: Each floor will have only four residences of 2,800 to more than 4,000 square feet. Each residence will have two to four bedrooms.
Amenities: The Club on the building’s fifth level is an indoor/outdoor gathering place for residents and their guests. Its features include a state-of-the-art fitness center designed by celebrity trainer and fitness guru Harley Pasternak, a lounge with a full bar, private dining and a landscaped outdoor terrace with fire pits. Staffed by a full-time attendant, the Club will also include a games room that will feature a custom-designed media wall. The property will also offer the famed Four Seasons anticipatory services, customized for each owner. Industry veteran Matthew Hoffman will be the property’s director of residences, while Maria Di Grande, an acclaimed art curator and principal of MDG Art Consulting, will offer personalized consultation and behind-the-scenes museum and gallery tours. Napa Valley-based wine consultant Kerrin Laz will lead a wine program, including personalized high-touch concierge wine services, customized experiences in California Wine Country, wine tastings and dinners in the Club. She also will co-host residents’ in-home wine experiences.
Website: 706sf.com

Rising 20 stories above San Francisco Bay, One Steuart Lane, which is at the epicenter of the city’s art and culture scene, offers the final opportunity for homeownership along the Embarcadero, the waterway/roadway that leads to the city’s port.

In addition to views of the landmark Bay Bridge and its Bay Lights art installation, the complex, in the city’s fastest-growing new neighborhood located south of Market Street and within walking distance of the Financial District, overlooks Treasure Island and the Ferry Building.

Each of the residences, whose ceilings rise more than nine feet, features floor-to-ceiling glass that blurs the lines between indoor and outdoor spaces. Twelve of the units have sliding-glass panels in the living rooms that open to balconies and 40-foot wraparound terraces that feature landscaped living wall dividers.

The building’s facade, made of Italian stone and minimally reflective, ultra-clear glass, is in a style that is reminiscent of ancient Roman architecture. It’s designed to capture the city’s abundant sunlight and cool climate to passively heat the residences and reduce energy consumption.

It has applied for LEED Gold certification.